I love the movie Three Coins in a Fountain. It’s the story of three American ladies in Italy. Two of them throw coins in the Trevi Fountain which is supposed to be lucky for a return to Rome. I’ve been to Rome twice and threw in coins each time. There’s a lot of wonderful moments in the film as well as some great scenery. It also has Louis Jourdan in it. He’s a wonderful actor. Frank Sinatra sang the theme song for the film and it’s beautiful. Give it a listen.

Since it’s St. Patrick’s Day weekend, I’m planning to watch one of my all time favorite Irish movies, Michael Collins. That man was truly what I would call one of my bad boys. He was strong, full of conviction and even though he was hated by the British, he did what he needed to do to stand up for what he believed even to the point of dying for those beliefs. This movie somewhat romanticizes what happened in the fight for Irish independence but it’s a good film. I love the way the cast relates to each other and the scenery and cinematography are superb. It doesn’t hurt that Alan Rickman, Aiden Quinn and Liam Neeson are easy on the eyes, too. Enjoy the day, drink a toast to your favorite Irishman and watch a flick.

Being a huge Alan Rickman fan, I’ve always wanted the Die Hard franchise to bring him back as his brother. Alas, that’s not to be but at least this Christmas season, they’re bringing in his son. I also love that they are using one of my favorite bands’ music in the film. At about 1:40 mins into this trailer is the music of TSO- Trans-Siberian Orchestra. Now, if they could only resurrect Hans, it’d be perfection.

I love this song and I especially love this movie version. Whenever I talk about my love for Alan Rickman’s work, I get the old song and dance about him always playing the bad guy. Au contraire, mon amis. He’s got quite a few films under his belt where he’s a wonderful person and this is one of my particular favorites. This film, Truly, Madly, Deeply is a great flick and the role of Jamie is played by Alan to perfection. Juliet Stevenson is awesome as well.  Check out this video of Alan singing The Sun Ain’t Gonna Shine, which really is a sad song but they sing it in a fun manner in this scene from the movie. AND, isn’t he handsome?

I was probably one of the last people to see this one. It wasn’t for lack of trying, but things kept coming up to prevent me from getting to the theatre. I finally saw it on Friday and there were only about eight of us in the room, so I figure that the rest of the population has seen it.

I have to confess that I was a bit disappointed in it. The first thing that annoyed me was the lighting. Yes, I get that it was supposed to be an Armageddon type battle but the cinematography was terrible. There was a lot of this film that I couldn’t see. I had to peer at the screen to determine what action was occurring. In the scene with the horde on the hill, the hill was black, the death eaters wore black, the sky was black…  See where I’m going with this?  It was quite hard to discern what was what. Very annoying and it took me right out of the story.

As to the flash back scene with Snape, I was highly disappointed with that. As anyone who has read this blog knows, Alan Rickman is my absolute favorite actor and I’ve always felt like he was underutilized in this series of films. Again, we have the same issue. This scene was beautifully written in the book and the film version made short shrift of it and didn’t engage my emotions as the written word did.  It could have been done so much better but I think the film maker wanted to focus on flash and action, not emotion. We were saying goodbye to characters we loved and I wanted it to be more poignant.

The film seemed disjointed and more about the special effects than the story.  I mean, really, why did the director spend so much time in Bellatrix’s vault and in the room of requirement? Just to show off the special effects?  That”s how it felt to me.

Don’t get me wrong, there were parts I liked but overall, this one was not the best of the films. I’m sure a lot of people will disagree with me and remember, this is only my opinion so don’t crucify me in the comments. We can agree to disagree if need be.

So, all in all, in my opinion, the final movie fell short of my expectations.  Sad, really, as I hoped the series would go out with a bang, not a whimper. 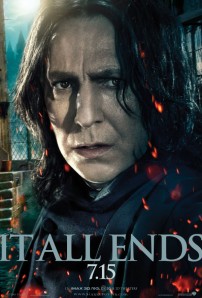 I must be the only person on Earth not to see Forrest Gump. I plan to go to my grave with that status. When it came out, I got sick of hearing all the catch phrases and it totally made me hate the movie. Too much hype, too many quotes. I DID see the Benjamin Button movie (very reluctantly, I may add). I heard this story was very similar to Forrest Gump which just strengthened my resolve not to see it.

It’s probably sacrilege for me to say the above. Please don’t hate me! LOL! 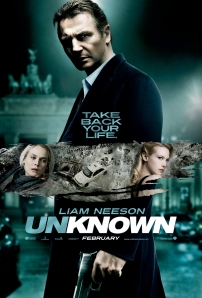 For the first time in a while, there was actually a movie I wanted to see out in theatres. I went today to see Unknown.  Liam Neeson is the star, and as usual, he’s his normal kick-butt self.  There were two women in the film. One was January Jones and she played his wife. The other was Diane Kruger, the woman that helps him when he’s being pursued. I much preferred the performance of Diane Kruger. She did a great job with a hard to play role. I think it was hard to play as the character was full of implausibilites. Some of the stuff she was asked to do would have never been done by a woman in her position.  A lot of this film stretched credulity. But it was a fun ride for two hours.

I loved that Aiden Quinn was in this film. I very much enjoy the film Michael Collins where Liam and Aiden play best friends and rivals for the love of Kitty.  It was fun to see them together again.  And it was also great to see Sebastian Koch in this film. One of my favorite foreign language films of all time has him in it. It’s called Black Book.  He’s an excellent actor. He plays the scientist, Professor Bressler.

For an afternoon of mindless entertainment, I say check this one out- it’s a wild romp.  AND if you’re so inclined, rent Black Book– an excellent, excellent choice.

I went to see The Black Swan based on the fact that Vincent Cassel was in it. I love him. He’s an awesome actor and sexy to boot.  He didn’t disappoint.  He was amazing and there was one scene in particular that was spectacular.

Natalie Portman is excellent in this  movie as well.  She nails her part.  It was quite intriguing and I enjoyed watching her. The dancing was well done even though  it was clear that Natalie didn’t do the more intricate steps. The director did a great job of showing her with the hand movements which she nailed.  The feet movements were shown separate. It was seamless.  I find it interesting that she seemed to have a dancer’s body in this film as well.  She must have trained for a while for the role.

Winona Ryder did a great job as well in the role of an aging ballerina. She was  too briefly shown, though.

This film was a bit of a tragedy but I enjoyed it. And Vincent? He was wicked cool!! Tres sexy.

Went to see The King’s Speech on my birthday after  lunch. I enjoyed the movie immensely. Colin Firth and Geoffrey Rush played off of each other quite well. They had a great chemistry and it seemed like they really enjoyed their scenes together. It was also nice to see Helena Bonham Carter back in a role where she seemed normal. She used to always be so diginified and lately, she seems like the odd, eccentric aunt that should be hiding in the cupboard.

I especially enjoyed the scenes where Bertie was cussing and it was helping him speak clearer. Those were priceless. Laugh out loud funny.  There were also a few places in the film where I got chills.

Michael Gambon as George V was excellent. Loved the actors playing Edward VIII (David- Guy Pearce) and Churchill (Timothy Spall) as well. Interesting side note- the actress that played Geoffrey’s wife in the movie was Jennifer Ehle.  She was Elizabeth Bennett to Colin’s Fitzwilliam Darcy in Pride and Prejudice in 1995 and they had an off screen relationship then.   A great little movie that I highly recommend. 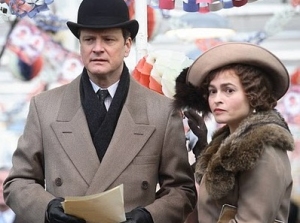 Just watched a horrendous horror  movie called Suspiria. AND I do  mean horrendous.  I say watched but I really wasn’t watching. I was finishing the edits on a book I have coming out in January, 2011 and adding an additional love scene at the recommendation of my editor.  The movie was on in the background and oh. dear. God.  It was awful! Horrible. The music was like damn Chinese water torture. My head still hurts from it.  The gore was so badly faked and the wolf? Let’s not even go there on the fakeness (is that a word? If not, it should be just for purposes of this wolf) of the canine. It was atrocious.

The funny thing (and I mean the only funny thing)  is that the movie was directed by a dude named Dario and the hero in the book  I was editing is named Dario.

Never, never, never watch this flick. As Nancy Reagan used to say, “just say no.”  Really, trust me on this one. 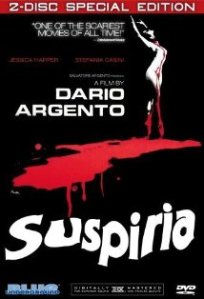