My great grandmother, Mallie Phillips Fowler wasn’t your typical sweet little old lady. She was a ball of fire and very sassy. I like to think I inherited some of her moxie. I was in my 20s when she died and she was in her 90s. One of the last times I saw her, she was in her yard with her cane in one hand and a rake in the other and my grandfather, her son, was begging her to go inside and let him do the raking. No way. She was adamant she could do it. He threatened her with the nursing home, but she just laughed and kept on working. She lived a number of months after that. Sadly, I lived over 360 miles away so I didn’t see her as often as I’d have liked.

Two things stand out in my memory of my whole life visiting her. She always, always, always—even those last visits—had a coconut cake on her dining room table. It was the best cake ever. She used fresh coconut and shredded it herself and used the coconut milk in the batter. None of us in the family have ever been able to duplicate it. One of a kind—like her. She also had one of those glass chicken candy dishes and it always had those hard candy mixes in it —you know, the kind you get at Christmas and they get all stuck together? My sister and I spent many hours tugging that junk apart. We each have a candy dish like that in our homes now. Mine holds loose change, though. Lol.

Why am I yakking about this lady? Well, my new book that’s out tomorrow and up for preorder now has a character who has some of my great grandmother’s characteristics. Miss Hattie in my story is one of the minor characters who plays a role in assisting the detectives in solving the murder at the heart of the story. She happens to be pretty sassy and makes a divine coconut cake (I almost said a to-die-for cake, but thought better of it 🙂 )

Overkill is available at Amazon, Barnes and Noble and Black Opal Books, among other retailers. As an ebook or paperback. 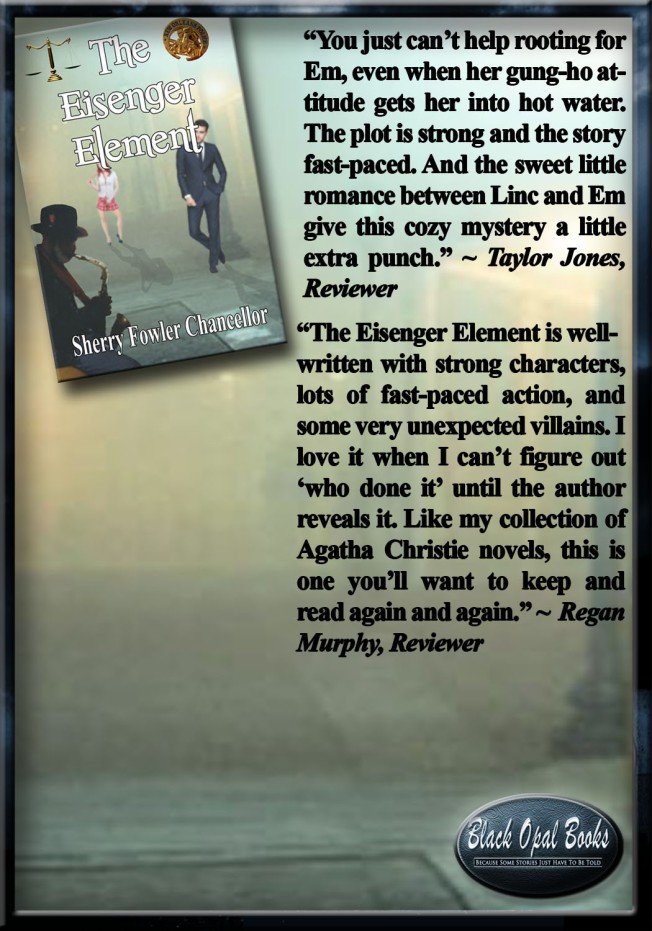 Here’s a teaser of The Eisenger Element (release date is Oct 24, 2015) and some more New Orleans pictures.

Wasn’t it bad enough his brother had been wrongly convicted? Now they were trying to hang a rap on him…

“You and your brother are very clever. He’s been convicted of murder himself—”

“Oh, so, in your esteemed opinion, the inclination to murder is something that’s in the genes?” Linc took a step in Emilia’s direction. “First of all, my brother was wrongfully convicted—wrongfully—and secondly, that’s one of the most inane things I think I’ve ever heard in my life.” Linc took another step toward her.

Emilia resisted the urge to back up, as she didn’t want Eisenger to know he’d gotten to her and that she was a bit frightened by the anger in his voice. She threw a grateful glance at Howard as he took hold of Lincoln’s upper arm.

“Hang on, man. No need to threaten the lady,” Howard said.

“She’s no lady and I didn’t threaten her.” Lincoln spread his arms and grinned but to Emilia it appeared to be more of a grimace than an actual smile. “I’m an innocent man standing in his own driveway being needled by an officer of the law. Maybe I need to make a call of my own to the police commissioner. Tell him all about the harassment I’m enduring based on the mere fact that I have a brother in Angola and I have a dead law partner who I couldn’t possibly have had a chance to kill. What do you think?” Linc glared at Emilia. “How do you think that phone call could affect that gold shield that I bet you have had for about five minutes?”

“You don’t have that kind of clout, mister. If you did, your brother wouldn’t be in prison now, would he?”

At that comment, Lincoln did lunge at Emilia. She whipped her gun up and aimed it directly at his chest.

Here is the official blurb for The Eisenger Element.  I’ll share a pic or two of New Orleans as well.

She thought she was ready for the hard cases, but that was before she met him…

Emilia Hammond recently earned her gold shield as a detective with the New Orleans police department and is working on her first assignment, eager to prove herself capable of handling her promotion. After a series of attacks on prostitutes in the French Quarter, she finds herself going undercover to investigate. In the process, she’s called to the scene of a murder at an attorney’s office. She has a good lead, a solid case, until her prime suspect turns the tables on her.

He’s trying to clear his innocent brother, and now he’s a murder suspect himself…

Attorney Lincoln Eisenger is from a prominent New Orleans Garden District family. His brother Myles is in Angola Prison for a murder he didn’t commit. Linc is determined to clear his brother’s name and bring him home. But when his law partner is killed, Linc becomes the prime suspect. Now he has to clear himself as well as his brother, all the while trying to ignore the sparks igniting between him and the spunky female detective he thought was a prostitute. 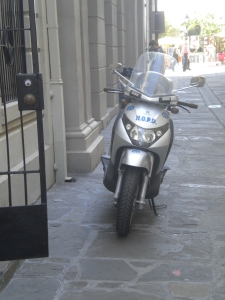 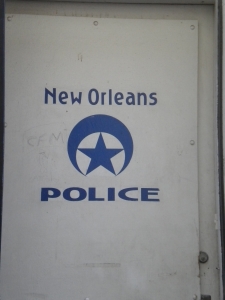 It’s here!  YAY- I’m excited to say that Senior Assassin is out in the world. I checked on my publisher’s website for the link but the site appears to be down for maintenance. I found the link on Amazon for the paperback but not kindle. I found the e-version on Kobo and both at Barnes and Noble.

http://www.blackopalbooks.com – Taylor Jones
The story is reminiscent of an Agatha Christie mystery, a cross between Hercule Poirot and Miss Marple. The storyline is intriguing, the characters charming, and the romance sweet. Chancellor gives an authentic view of what life was like for a “middle class” librarian, trying to mingle with “upper class” aristocrats on a luxury train. If you’re looking for something an old-fashioned mystery/romance, it would be hard to go wrong with Senior Assassin. 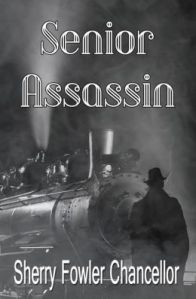 http://www.blackopalbooks.com – Regan Murphy
I thoroughly enjoyed Senior Assassin. Since I’m a big Agatha Christie fan, this book was right up my alley. It’s a refreshing change from all the blood and gore so prevalent in mysteries today. That’s not to say there’s no blood in the book, but Chancellor does keep it to a minimum. The plot is strong, the characters charming and well-developed, and romance sweet and heartwarming. This is the kind of book you’ll want to keep on your shelf to read over and over again.

This is a photo of an old train engine no longer in operation. It’s on display in the median in my hometown. Every time I drive by it, I’m reminded of my murder mystery with romantic elements- Senior Assassin– that is now due to be released at the end of September, 2014.  I love old trains. So romantic (although I’m sure they weren’t when coal smoke was coming out of the smokestack and the windows were open. I bet a lot of folks inhaled some nasty black stuff there. Haha.

Sorry I’ve been MIA from this blog. I fell on June 16 and broke my right elbow and my left foot. I spent some time in a splint and sling for the  arm and still have a cast on the foot. It’s  been a rough month for sure. I am very lucky I didn’t do more damage and I will heal but I’m still a bit whiny in the midst of those blessings.

I did receive news today that Senior Assassin, my romantic mystery set on The Orient Express has been fully edited and will be released October 4, 2014.  I’m super excited for it to come out and as soon as I get the cover and the okay to share it, I will be posting it here. October is my favorite month of the year so I’m hyped to bring my book out to the world then.

Here’s the back cover blurb on my upcoming release from Black Opal Books, Senior Assassin:

In 1935 Europe, storm clouds of impending hostilities loom over the landscape, threatening the uneasy peace on the continent since the upheaval of the last world war.

Winchester Barrington, IV, scion of a wealthy Connecticut family, boards the luxury train, The Orient Express, ostensibly for a pleasure trip from Paris to Istanbul. In reality, he’s a spy for the United States War Department on the trail of a master assassin. His mission: to find and capture this elusive executioner.

Among a growing list of suspects, including an Oxford Don, an American entrepreneur, a Chicago gangster, and two mysterious Turkish men, Win finds himself attracted to a shy librarian who may actually be his quarry.

Murder Deja Vu by Polly Iyer was an enjoyable read. It started a little slow for me. The hero in the story spent fifteen years in prison for a murder he didn’t commit and once he’s out and an investigator for his lawyer is trying to uncover the truth, another murder occurs. This murder is of a local woman and is carried out in the same manner. This is when the action picked up considerably in the story.

The villains in this story were very evil, especially the former husband of the heroine. He’s the local prosecutor and has an agenda of his own and while I enjoyed the story, the only part that I didn’t like is that we didn’t get to see him get his comeuppance. It was almost an aside at the end of the book. I really, really would have liked a scene where we, as the readers, could watch as he went down.

I recommend this one. The writing is clean and clear and the author will take you on an adventure.