Today’s word is a fun one. Its meaning is comparing horoscopes between two (or more) people to determine if they are likely to be compatible or have a good relationship. The word is SYNASTRY.

Have you ever done that? I’ve done it in a few Chinese restaurants where they have the years on the paper placemat. We always check that out with the people we’re with to see if we’re supposed to even be at the same table. I’m a Rat. Next time you’re in the mood, research your animal and see if we’d be compatible. Check it out here– Seems like Rats make good lawyers. Who knew? LOL!

In the last week, I’ve had a lot of sadness in my life. It’s weird how it comes in spurts like that. It started with the death of the man who rented office space from me. He’s been ill for a while so even though we all knew he was not doing well, it was a bit of a shock to hear that he passed away in his sleep during the day on last Friday. His family has decided to have his services in the town where he grew up instead of here where he lived for over thirty years. This saddens me as he was a big part of the community here and they are robbing us of the chance to say goodbye.

In the last day, I learned that a friend’s son was killed when a car backed over him. He was only seven. I’m utterly shattered for my friend and her family. I know how much they adored that little boy and I can’t wrap my head around such a devastating loss. I don’t know how they’re going to make it from day to day with this hole in their lives. There’s nothing I can say or do to make it better. I wish there was.

Death really puts things in perspective. I know I let things bother me and I get hurt easily but as I think about these people -both too young to go- being gone and no longer able to enjoy time with family and friends, I find myself hoping that the life I lead in the time I have left is one such that my family and friends will be as bereft as I am at the loss of these two. I endeavor to be as good a person as they both were.

I had depositions this afternoon that canceled at the last minute and was able to join some friends for painting, wine and shop talk. I never do this. I stay at the office and plug away. I was encouraged by my staff to run away and play (think they were trying to get rid of me so they could party, too?)  Anyway, I had a ball and check out my painting: 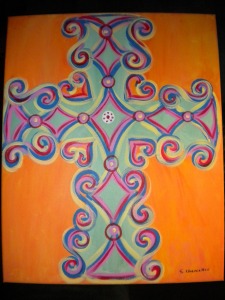 Took the day off today and am hanging with my friends Maureen (Mo), Jennifer, and Victoria. We are having a blast. Had lunch at Fournaris Brothers, Greek restaurant.  They are making me laugh my head off.  I needed this time with them. They are the best and none of them suck the life out of me. They lift me up- those are the best types of friends to have- Sometimes it gets old being the one to always have to be the up-lifter. This is a nice change of pace!

AND I have gotten a great idea as I’ve sat here and am excited to get started on a new project. Such fun.  The picture represents part of my idea.

Am visiting a friend in the Atlanta Metro area and have had a great time.  We have laughed and talked (shared a bit of Jack Daniels) and she had brought me out of the doldrums.  We scrapbooked today Archivers and had dinner from Atlanta Bread Co.  Good friends make for good times.