So, got an a** load of new books at RWA National Conference last week.  I have given some to a dear friend who is my beta reader, chapter members, office staff and my mother. I kept a hefty portion for myself because I stood in long lines with my shoulder hurting from the weight of the tote bag (and box) full of them- and not least of all, because I love to read.  It was a very tough decision on which to read first- after a few days of organizing and just fondling them, I settled on The Rules of Gentility for my first choice. It is written by Janet Mullany and the cover says she is “the witty, secret love child of Jane Austen and Lord Byron.”  I have to agree. It was a quick, fun read and if you like Jane Austen, you’ll like this. The heroine is also described as Bridget Jones-like on the back cover.  Full of humor, charm and two proposals in the water closet, I recommend this book for the pure inane fun of the two lead characters.  They are quite evenly matched.

The second one I chose was on a whole different level and different century. It is called A Cast off Coven by Juliet Blackwell. It’s the second in a series of about a witch who owns a vintage clothing store in the Haight- Asbury district of San Fransisco in this century. The story involves nuns, old clothes and a death at an art school. I found that it wasn’t necessary to have read the first one to enjoy this second one.  It is more on the lines of what is called a cozy mystery. It has a romantic element but the murder/haunting is the major focus of the story. This witch is funny and sassy. The best part is she is allergic to cats and her familiar is a pig.  His name is Oscar and he is a gnome-like critter in his real form but takes on a pot bellied pig persona in front of people. He likes to cook, too.  A very good story and a fun escape.  I liked this one enough to seek out the first one to read as well. 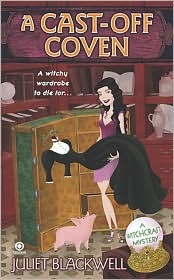