Last night I attended a show in Biloxi, Mississippi called Tim Conway and Friends.  It was soooo funny-  I knew it would be.  He has been a favorite of mine since I was a kid.  I adore him.  He still has that elusive quality- comic timing!  He’s so funny, he makes me laugh until I cry. His monologues were hilarious and the skits were great. Dorf, the golfer, made an appearance and so did the old man  with the shuffle.   I wiped tears of laughter all night.

Tim had Louise Duart with him and she is an impressionist.  She was fantastic. She had the voices down but also the facial expressions-  She did a George Burns/Gracie Allen segment that was truly genius.  Chuck McCann was the comic foil to Tim and true to the tradition, Tim cracked him up several times during the evening. It always amazes me to watch his castmates laugh at him and he never breaks character or cracks a smile.

A wonderful night. It was fantastic. 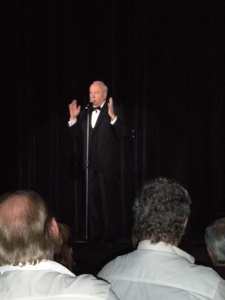